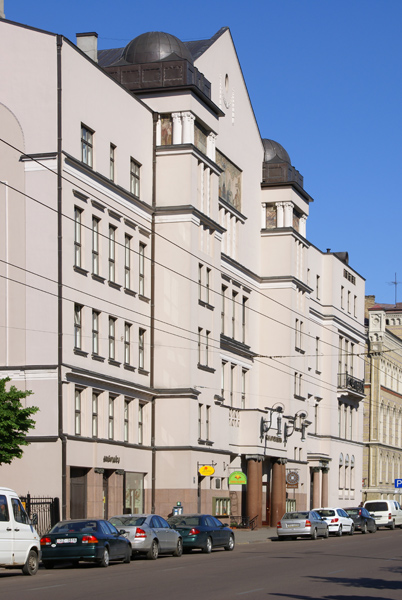 Museum “Riga Art Nouveau Centre” wishes everyone a sunny and vigorous Summer Solstice! For your attention the mosaics of the building at Merkela iela 13 - Riga Latvian Society House.

One of the first buildings in the manner of Neoclassicism in Riga. The first building of Riga Latvian Society in this place was built in 1869, later it was rebuilt, until in 1908 it was totally destroyed by fire. Soon architects Eižens Laube and Ernests Pole developed a project for a new building – they planned to partially include the walls of the burned building in the project and designed the façade in typical manner of Latvian National Romanticism. Still, the walls of the previous building had to be taken down and the project was redesigned by changing the design of the façade. It was designed in the manner of Neoclassicism. The new building was dedicated on 18 December 1909. It has an entrance portico with Ionic columns made of polished granite and a high triangle-shaped gable adorned with a colorful panno “Strength” designed in a figuratively symbolical manner characteristic of Art Nuoveau. Similar pannos crown the avant-corpses. All these artworks were made by painter Janis Rozentāls to his own designs. There is a stage suitable for theatre performances, spacious hall and many other premises. The finish of interior is mainly designed in the manner of Neoclassicism. The authors of sculptural details on the walls and ceilings of several rooms - F. Vlassak and M. Lotze, whereas, the author of stained glass located in the staircase – P. Krimuldēns. From 1935 until 1938, on the corner of Merķeļa iela and Arhitektu iela, an extension to the building with a restaurant and several rooms for social gatherings and a club was built within the period from 1935 until 1938 to the designs of E. Laube.

Full info of the House >>