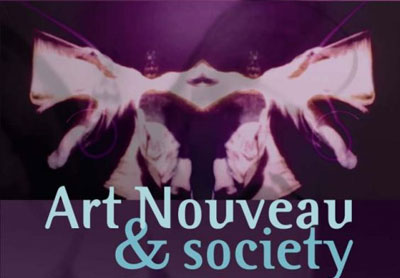 The screening will open the celebration event program of the 150th anniversary of architect Konstantīns Pēkšēns. "Art Nouveau and society" is the currently latest of projects by the association, made in 2008 and showing the history of culture and social processes that deeply influenced the advancement of Art Nouveau. The film explains the phenomenon of Art Nouveau in Europe, linking the past with current processes. The unusual and original format of the screening, enabling three screens at the same time, is so abound in information that we suggest several watching times for the best comprehension. The aim of the film is to rouse explorer’s spirit and intellectual and emotional experience, giving the opportunity to renew the way we look at Art Nouveau.
The film was premiered on May 16, 2008 in Germany, city of Bad Neuheim. Since then it has been travelling around the world and screened in many cities. "Art Nouveau and society" portrays the processes of art and society in the beginning of the 20th century. Although Art Nouveau was a common phenomenon, it had different forms of expression. It was the time of peace and economical stimulation, when industrialization and urbanization were altering the world. New technologies changed our life, and so the meaning of "leisure" was changed as well. The film is narrated in the present tense to captivate the public; by the usage of audiovisual means, details of our common cultural heritage are explained.