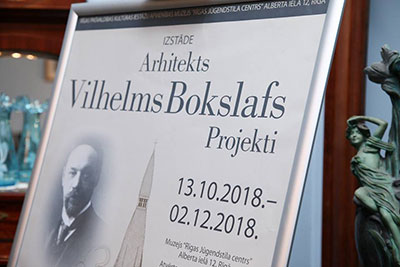 The anniversary events will start on 12 October when a remembrance ceremony and laying of flowers will take place at the Bokslaff family vault. The event will be addressed by Andris Gobiņš, the leader  the informal group “Friends of the Big Cemetery”. The Bockslaff family will be represented in the celebration by Klaus Bockslaff, who will also address the participants of the events.
Dedicated to the 160th birth anniversary of the outstanding architect and art historian will also be the scientific readings at the House of Architects at Torņa iela 11, starting at 13.30 with lecture “Wilhelm Bockslaff, an Architect” delivered by Dr.habil.arch. Jānis Krastiņš. It will be followed by lecture “Riga Economic Growth at the beginning of 20th century: the contribution of merchants and big manufacturers to the city growth and sponsorship” by Dr.hist. Raimonds Cerūzis. The conference will popularize Wilhelm Bockslaff’s investment in the development of Riga as well as inform the listeners about the Bockslaff family’s contribution to the growth of the city and sponsorship.
At the conclusion of the anniversary celebration, at 18.00 exhibition “Wilhem Bockslaff. Draft Designs” will be opened at the museum “Riga Art Nouveau Centre”. The visitors of the exhibition will have a unique chance to examine the building designs, drawings and drafts by the well-known architect. The exhibition will be open until 2 December, 2018.
Wilhelm Ludwig Nicholas Bockslaff (12.10.1858. Riga – 09.03.1945. Poznan) – a practician and theoretician of Baltic German origin, art historian and a teacher was an artist of unusual scale and scientist with outstanding capacity for work and versatile master of his trade.
The architect acquired his education at Riga Polytechnic, he started working at architect Heinrich Sheel’s construction office and afterwards took up an independent architect’s practice. He worked as the architect for the Big Guild, Stock Exchange Committee and other institutions. Wilhelm Bockslaff participated in the restauration of St. Peter’s Church after the damage caused to it during the attacks by Bermont’s Army in 1919.
The architect has designed many outstanding buildings in Riga, such as the Commerce School at Kalpaka bulvaris, Agenskalns and Ciekurkalns water towers, St. Cross Church in Ropažu iela,  the former office and apartment building of the Big Guild at Amatu iela 4 and others.
The anniversary events are organized by museum “Riga Art Nouveau Centre”  Association of Culture Institutions of Riga City Council, the informal group “Friends of the Big Cemetary”, society “Domus Rigensis”. The celebration of the birth anniversary is supported by Riga Technical University and the Architect Association of Latvia.
The inhabitants of Riga and guests of the city are welcome to honour the heritage of the outstanding architect and participate in the remembrance events dedicated to Wilhelm Bockslaff in Riga.
To participate in the remembrance event, please arrive at the parking lot at Klusā iela 2 at 11.45.