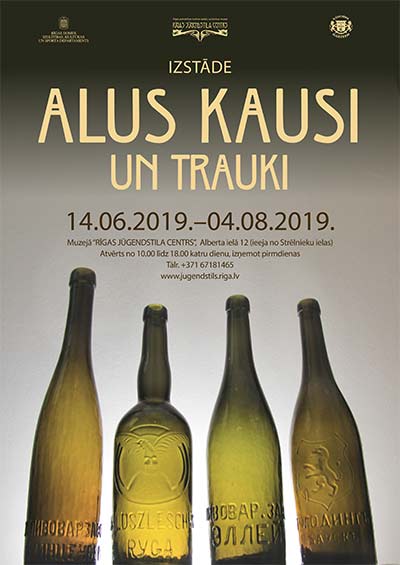 From 14 June till 8 August the Museum “Riga Art Nouveau Centre” will host an exhibition “Beer Mugs and Vessels”. The exhibition will feature the items associated with beer, which is the traditional drink during the Midsummer celebration called Līgo or Jāņi: there are beer mugs as well as beer bottles, glasses, barrels and boxes manufactured in Latvia. The exhibition will also feature a postcard and poster collection about the Līgo Festival and open-air dance parties as well as flowers and greeneries characteristic to the Festival. The exhibition has been created in cooperation with collectors Viktorija Raņķevica and Arturs Altbergs.

As the Latvian national solstice festival is approaching, the Museum is offering its visitors an opportunity to see an exhibition devoted to one of the most favourite Latvian drinks and its manufacturers. The collection presented at the exhibition demonstrates high aesthetic quality as well as impeccable taste in the packaging and serving of beer produce on the verge of 20th century. The exhibition invites us to have a look into the past and discover the colourful, vivid and what’s the main – a tasteful and aesthetic world. On the verge of 20th century, beer manufacturers used to pay particular attention to the way of presenting and table manners regarding beer produce.

Beer as a refreshing and slightly intoxicating drink has been known for quite a while. The culture of brewing and consuming it has both evolved and deteriorated through centuries. Likewise, in the territory of Latvia, that until 1918 formed a part of the Rusian Empire, these developments were not an exception. The mutual competition of beer ,manufacturers promoted the wish to differ from rivals, which explains the customised and very elaborated design of beer containers (bottles, barrels, mugs etc.), labels, corks, coasters, advertising posters, postcards and other beer-related items. The manufacturers also devoted a lot of effort to the manner of serving – beer was served in beautiful mugs and glasses which turned enjoying beer into a special event.

During the Solstice celebration the beauty of nature will enter the museum “Riga Art Nouveau Centre” and the elegant Art Nouveau interior will be supplemented by the flower compositions in Jāņi mood. There is a great diversity of postcards devoted to the celebration: cards which are both colourful and black and white, with nature sceneries, flower bouquets and Jāņi guests. The photos feature local breweries, for example, “Ilgezeem” or Iļģuciems beer brewery and “Waldschlosschen” that still operates today under the name of “Aldaris”.

Working hours of the Museum “Riga Art Nouveau Centre” during the festival: