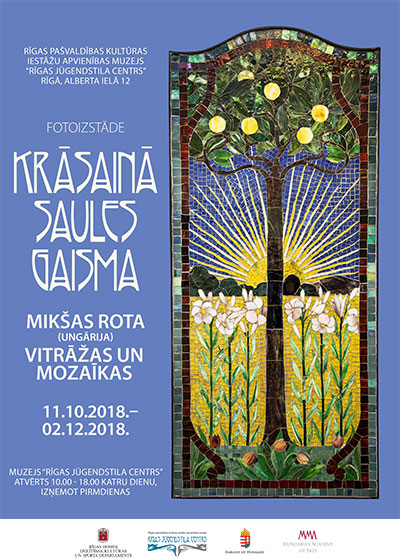 During the turn of the 19th and 20th century when there was a renaissance of stained glass and mosaic art in Europe,  Róth Miksa founded and led the best known and most productive stained glass and mosaic workshop in Hungary. After the settlement between Austria and Hungary in 1867 resulting in Austro-Hungarian Empire, the demand arose for new public buildings, which, similar to churches, culture and entertainment sites and thermal pools, were decorated with sculptures, murals, ceramics, stained glass and mosaics pertinent to the function and significance of the building. The partly forgotten branch of art that had flourished in medieval times regained its popularity in the second half of 1990s and found its place also in private buildings – detached houses and apartments of well-off people.

Róth Miksa founded his workshop in 1885 and cooperated with the most outstanding architects and artists of his time. The artisans of his workshop created decorations for public buildings, churches, synagogues and villas. Among the best pieces by Róth Miksa there were stained glass windows and mosaics in the Parliament Building in Budapest, Chapel of the Royal Palace, Academy of Music, the main building of the former “Gresham’s Insurance House” as well as in vaults and mausoleums in the National Fiumei Road Cemetery and Kozma Street Cemetery. Róth Miksa also received orders from abroad – they made the stained glass ceiling for the National Theatre of Mexico (1910) according to the sketches by Géza Maróti as well as a stained glass window for the Royal Palace in the Hague.

The exhibition “The Colourful Sunlight. Stained glass and mosaics by Róth Miksa (Hungary)” was designed in cooperation with the Art Academy of Hungary and Embassy of Hungary to Latvia. The exhibition was opened within the “Days of Hungary in Latvia 2018”.

The exhibition at the museum “Riga Art Nouveau Centre” is open from 11 October to 2 December” every day from 10.00 to 18.00, except Mondays.