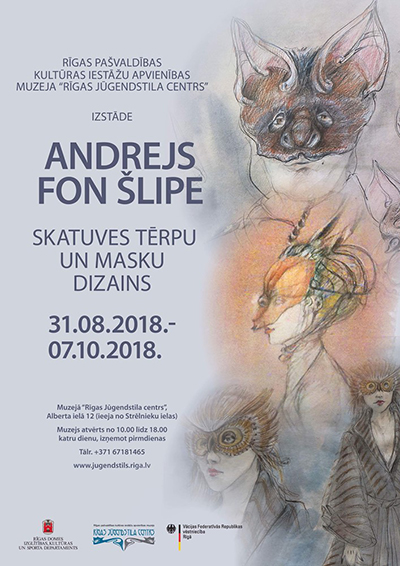 The exhibition will be open from August 31 to October 7 at the museum “Riga Art Nouveau Centre”. The exhibition “Andrey von Schlippe. Stage costume and mask design” features stage design illustrations of several plays and operas as well as drafts of stage costumes and masks from the plays like “The Terrible Five” (Die  fürchterlichen  Fünf). The story is about five ugly characters – a spider, bat, rat, toad and hyena who are trying to be liked by the world. The book made its author Wolf Erlbruch a widely-known children’s writer.

Andrey von Schlippe was awarded Master’s degree from Munich Academy of Arts in 1990 where he studied theatre costume and scenography design. Along with the studies he worked as a director’s assistant and interpreter with stage director Yurij Lyubimov in several European opera houses and theatres, such as Munich National Theatre, Stuttgart State Theatre, Covent Garden, Zurich Opera House etc. Since 1991, Andrey von Schlippe has been acting as a costume and stage designer in various European theatres.

His first designs were created for the Finnish National Theatre is Helsinki – in the plays directed by Yuri Lyubimov “Teenager” by Fyodor Dostoevsky (the novel first published in 1875) and “Comedians”- a collage of four plays by Alexander Ostrovskij. These were followed by the cooperation with the Moscow Taganka Theatre in the play “Doctor Zhivago” (by Boris Pasternak, directed by Yuri Lyubimov) in festival “Wiener Festwochen”, as well as in plays on stages in Germany, Switzerland, Finland, Norway and Poland, for example, the opera by Leoš Janáček “Jenufa” in the Bonn Opera House, “Peer Gynt” by Henrik Ibsen in the Swedish Theatre in Helsinki and August Strindberg’s “A Dream Play” in the Lucerne Theatre. In 2001 Andrey von Sclippe was the director and stage designer for J. R. R. Tolkien’s novel “The Lord of Rings” at the Swedish Theatre in Helsinki. The more recent scenography and designs have been created for the staging of “A Dream Play” written by the Swedish playwright August Strindberg in 1901. Since 1997 Andrey von Schlippe has been the director of production and scenographer for the “Tollwood Festival” in Munich.

The exhibition “Andrey von Schlippe. Stage costume and mask design” at the museum “Riga Art Nouveau Centre” will be open until 7 October, 2018 and will take its visitors to the splendid world of stage art.