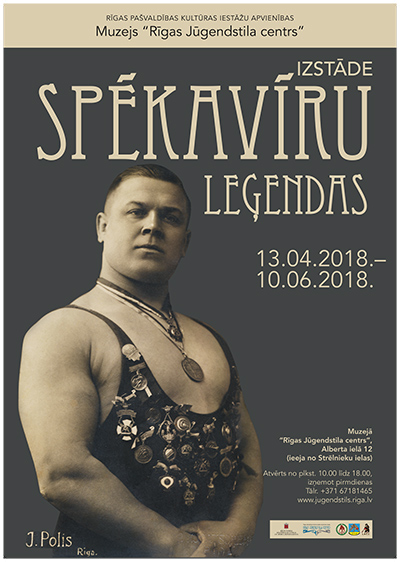 The “Musclemen Legends” is the second exhibition created in co-operation with the long-term friend of the museum Vladimirs Resetovs and collector and athlete Aleksejs Kostirevs. The first time when Riga Art Nouveau Centre introduced visitors to wrestling and heavy athletics in the Art Nouveau age was in 2012 when the museum together with Vladimirs Rešetovs and Aleksejs Kostirevs as well as the Sports Museum of Latvia organized the first exhibition – the Age of Musclemen”. It provided insights into the development of wrestling and heavy athletics at the beginning of 1900s and showed various sport devices and photos featuring the Art Nouveau style.
This time the museum will present the photos from the musclemen at the beginning of 1900s as well as competition advertisements, programmes and unique medals and awards that have been won in innumerable wrestling arenas. Latvian musclemen used to be popular participants in tournaments and won competitions in different countries. On the verge of the 19th and 20th century sport clubs and associations were founded in the territory of Latvia and the musclemen movement had a particular place in the society. The sports had a particular role in the physical education of young people and created a strong image of the man.
At the beginnings of 1900s in Riga and other places of Latvia wrestling and heavy athletics societies and clubs were created and developed. The wrestlers appeared in advertisements, postcards were published with the portraits of the musclemen and moments from fights which were arranged at photo studios. The strongest men in Latvia – Jānis Polis, Jānis Krauze, Jānis Burgmeistars (participated in competitions under the name of Ivans Romanovs), Jānis Leskinovičs and others – were recognized in public and respected, their strength and athletic built featured in postcards and competition programmes. Musclemen tournaments were very special events followed by dances and informal parties. These fights, however, were not just a privilege of men, there were also women whose photos will also be shown in the exhibition.
The museum “Riga Art Nouveau Centre” invites the visitors to enjoy the interaction of strength and beauty in the exhibition “Musclemen Legends” from April 13 – June 10. The museum is open from10.00 to 18.00 every day, except Mondays.